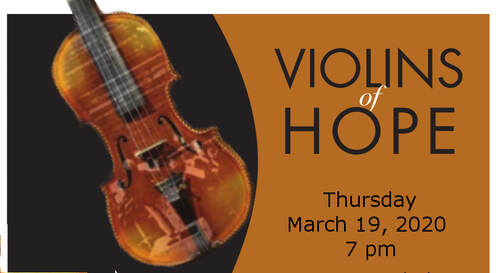 Synopsis
For more than 20 years, Tel Aviv violin maker Amnon Weinstein and his son Avshalom have collected and restored instruments played by Jewish musicians during the Holocaust — instruments often lost or abandoned as their owners attempted to escape the atrocities of World War II. The instruments lived on as their owners perished.

​To tell the long-forgotten stories of these stringed instruments and the people who played them, the Weinsteins created Violins of Hope, a traveling project dedicated to their collection of more than 60 restored violins, violas and cellos.
The Longer Story
81 years ago Moshe  and Golda Weinstein moved to Tel Aviv and opened a violin shop. Graduates of the Vilna conservatory, Moshe a violinist and Golda a pianist, they followed the large Jewish migration from Europe to Palestine.

In postwar Europe survivors of the Holocaust—remnants of the continent’s once rich and thriving Jewish communities—poured out of liberated concentration camps, work camps, and displaced-persons camps. Some made their way to British Mandate Palestine that would soon become the new, modern Jewish State of Israel. Many made their way to the United States, Canada, and Latin America. Others remained behind the Iron Curtain as the Cold War settled across the globe.

Amid human destruction and displacement, the treasures of the Jewish people were also displaced. The sacred objects—Torah scrolls, prayer shawls, and other ritual items—but in even greater numbers, the artistic and musical treasures sacred to Jewish culture throughout Europe were displaced. The Nazis burned, smashed, looted, and confiscated the possessions of millions. But some precious pieces remained. Many musical instruments survived when their owners did not. Many more were lost or abandoned as their owners escaped the war. And when the Allies liberated Europe in 1945 hope remained.

​For Moshe and Golda’s son, Amnon Weinstein, that hope was manifested in the wooden bodies of violins, violas, and cellos rescued from the Holocaust.
​
Amnon and his son, Avshalom, created Violins of Hope to celebrate the triumph of the human spirit. Using their private collection of over 60 violins, violas, and cellos, all restored since the end of World War II, the Weinsteins continue to tell the story of the instruments’ previous owners. Each has its own individual story from the Holocaust.
The Mission
Music has the power to heal,to transcend pain and anguish and to bring hope. Even through humanity's darkest chapters — music persists.

The mission of Violins of Hope is to educate audiences about the Holocaust through music and culture using a collection of violins, violas, and cellos rescued from the Holocaust and restored by Israeli luthiers Amnon Weinstein and his son Avshalom Weinstein.

Included is a violin played in the Auschwitz orchestra as well as one used on the Kindertransport. Some were played by Jewish inmates in Nazi concentration camps; others belonged to the Klezmer musical culture, which was all but destroyed by the Nazis. These instruments were silenced by World War II.

After painstaking restoration, however, they have new life and sound, giving voice to a generation lost in the Holocaust. It restores hope, the strength of the human spirit, and the power of music. It is proof of the victory of life over death and the victory of memory over oblivion.

Marking the 75th anniversary of the liberation of Auschwitz-Birkenau concentration camps and to honor the six million Jewish victims of the Holocaust and millions of other victims of the Nazis, Violins of Hope will come to Los Angeles in March and April 2020. In addition to concerts featuring the instruments, selected violins from the collection will be exhibited at the Los Angeles Museum of the Holocaust. The exhibition will showcase instruments with their individual stories.

Violins of Hope is not only a memorial to the lost culture and people, it is an educational project that reaches students and adults, people of all faiths and backgrounds. Visitors will attend narrated concerts telling the history of some of the instruments – such as the violin which was thrown out of a cattle car on the way from France to Auschwitz; the violin that was buried under the snow in Holland; the violins that saved the lives of people who played in camp orchestras and others who survived to tell the story. So many stories, so much history. These instruments are a symbol of hope.